Digital Mobile Radio (DMR) is the standard for digital radio communications developed by the European Telecommunications Standards Institute (ETSI) for professional mobile radio users (PMRs) in the framework of existing licensed frequency bandwidths with 12.5 kHz channels. , used in land mobile radio communication. In April 2005, the first release of the DMR - ETSI TS 102 361 was released, which describes the standard. Description consists of several parts. DMR Air Interface (AI) protocol - Part 1), DMR voice and generic services and facilities (part 2). In January 2006, a third part of the standard DMR, describing the packet data protocol (DMR data protocol), was added. The fourth part describes the transmission protocol in trunking networks (DMR trunking protocol). At the core of the DMR is the TDMA (Time Division Multiple Access) technology, which allows you to place two time intervals on a single frequency carrier with a bandwidth of 12.5 kHz.

The main goals of the DMR standard are:

- providing a powerful and versatile technology platform that professional users can use to solve both current and future challenges.

The DMR standard has several levels of application (Tier-layers):

The Tier I level is used for low-power (with power not more than 0.5 W) unlicensed radio stations (for free use in the range of 446 MHz) with a limited number of channels, without repeaters, telephone interfaces and external or fixed antennas. The most suitable for private use, in recreation areas, in small shopping centers, and other applications that do not require coverage and expanded functionality.

The use of Tier II and Tier III equipment requires authorization for the use of radio frequencies or radio frequency channels and the registration of RES in the Ukrchastotnaglyad State Enterprise.

Advantage of switching to DMR standard

The DMR standard (ETSI TS102 361) is primarily intended for users of analog professional radio systems operating in licensed PMR frequencies. There are many reasons why these users make sense to switch to DMR. The most significant of them:

For many users of two-way radio systems, the most important advantage of digital standards is that they allow more efficient use of the resource of existing licensed channels. Ether is becoming more and more loaded, and former licensed channel structures, originally designed to service a small number of users, are no longer able to cope with increased levels of traffic. To improve the efficiency of frequency resource use, the DMR (ETSI) protocol uses the TDMA method in a 12.5KHz channel divided into two temporary slots. This allows you to save the well-known operating characteristics of the band 12.5 kHz and at the same time makes it possible, in a universal way, depending on the current needs, to connect a significantly larger number of subscribers with existing licensed channels in the organization. For example, two intervals in one channel can be used to transfer two separate calls. You can also select one of the call intervals, and in the second one, you can either transfer data or priority traffic at the same time.

Figures 1.1 and 1.2 give examples of analogue and digital conventional radio systems for the purpose of a clear comparison of the efficiency of the use of radio resources.

2) the presence of frequencies

Digital Mobile Radio (ETSI) devices are available in the same frequency band as the current licensed PMR systems. Users will not need to switch to other ranges or acquire other licenses. In addition, there is no risk of new types of interference. Therefore, it is quick and easy to improve the efficiency of using the frequency resource.

One of the main characteristics of mobile devices has always been the battery life between recharging. Previously, there were only two ways to increase the battery life of the device from one charge. The first is to increase the capacity of the battery. Manufacturers of batteries have already done a lot to increase the capacity of their products, but further improvement of characteristics at this time is possible only by increasing the size, and hence to the detriment of portability. Another way is to reduce the power of the transmitter, the most energy-consuming part of the terminal for two-way radio communication. However, this will result in a narrowing of its zone of operation and the potential for interference from other devices, which is an unacceptable compromise for the professional system.

The DMR ETSI standard offers another, rather effective option. Because one call takes only one of two TDMA intervals, it needs only half the transmitter power. Half of the time - in the unused interval - the transmitter is in standby mode. With a typical workload of "5% Reception, 5% Transmission, 90% Standby", an approximate 80% battery charge is consumed during transmission. The two TDMA interlacing protocol reduces the real time of the transmitter by half, thus saving up to 40% of electricity, which contributes to an increase in standby time of up to 40% of talk time. As a result, the overall battery consumption during calls is greatly reduced, which allows for longer use of the terminal from one charge. In addition, the ETSI DMR provides power management and standby power management technologies that further enhance battery life.

Users of professional two-way radio systems require a clear, continuous and reliable voice communication. A missed call, an operator error, a twisted message, or a dropped battery may result in reduced productivity, waste of time and money, discontent with customers, and loss of business. Because of the physical characteristics of the radio, analog systems can suffer from a number of factors limiting the range of their actions and the clarity of speech transmission. Any failure or distortion of the analog signal caused by external factors directly affects the quality of the language reproduced by the receiver. The weakened signal can be amplified and retransmitted, but the original quality of the language can not be restored. What most often occurs is the result of such a deterioration of the signal-increasing the level of noise and transmission defects, through which the signal becomes less demanding, the closer the subscriber approaches the boundary of the real range of the terminal. Such a deterioration in the quality of communication can, at best, simply act on the nerves, and in the worst case, deteriorate further, until the language becomes almost completely indecisive.

In systems of the same standard DMR ETSI uses means of correction of errors, allowing to reproduce the language in virtually the original quality, virtually no matter what the point of the zone of the network is the subscriber. Although the digital radio signal of the DMR system is subject to the same physical effects as the signal of the analog system, when the signal strength of the signal is deteriorated, digital traffic can reach the recipient intact, even if the signal strength falls within the exponent.

Figure 1.3 clearly shows the comparison of the quality of sound analogue and digital radio systems. 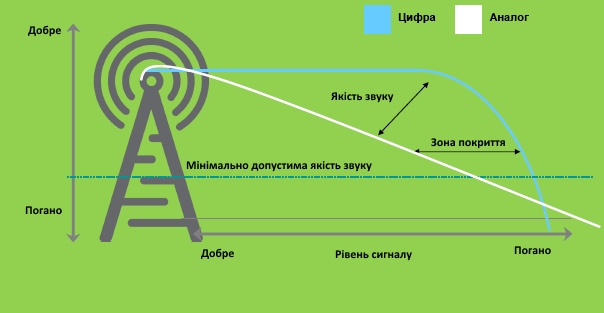 The DMR standard digital receivers simply reject all data that they consider to be false. While the "dirty" signal can result in defects in the sound reproduced digital receiver, such as a short gap sound or surge "mechanical" noise, but it never leads to constant interference possible in analog systems when working in difficult conditions. If the DMR receiver can "understand" the digital speech signal, then it can decode it and clearly reproduce the language. Moreover, in the default decoder Digital Mobile Radio (chosen solution DMR MoU) includes background noise suppression system at the transmitter. Therefore, for example, the noise of a crowd or passing cars is not even transmitted and the receiving party does not hear it.

5) the versatility and breadth of new opportunities

In traditional two-way FDMA radio systems, each call takes up the entire channel. Therefore, only one half-duplex call can be transmitted in one channel. Because the DMR standard uses the TDMA protocol, these technical limitations do not apply to it. Two time slots can be used to transfer two half-duplex calls without the need to connect additional equipment and the risk of losing connection quality. You can also use a second slot for other purposes: for example, to send signals on the reverse channel. This function can be used to control priority calls, remote transmitting terminal disconnected with a lower priority for an emergency call, and so on. The second time slot can also be used to transfer application data - for example, text messages or location data - in parallel with language traffic. This feature is useful, for example, control systems, in which employees are transferred as specified in the language and visual form.

Figure 1.4 shows a comparison of the advantages of TDMA technology in a digital signal over an analogue. 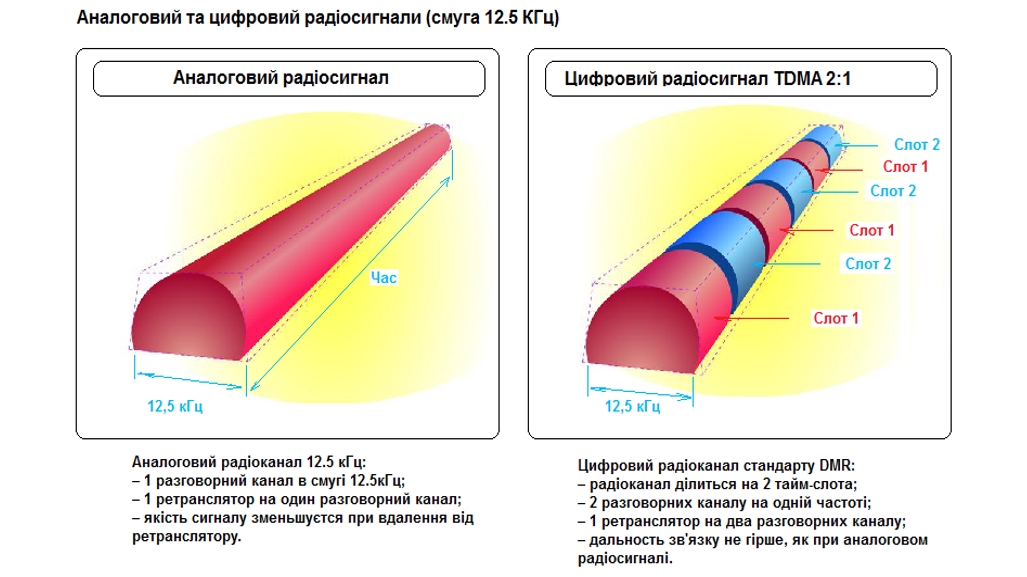 The DMR standard also gives you the freedom to act in the event of new applications that use two temporary slots in some new way. Not only does it protect the original investment, it also opens the way for the introduction of new ways to use digital two-way radio systems. For example, the DMR standard provides the ability to temporarily combine slots to increase data transfer speeds, as well as the simultaneous use of both slots for full-duplex individual calls. In the future, there will be other opportunities, due to the real needs of users of professional systems of two-way radio. The DMR communication facilities now allow you to take advantage of dual network capacity and signaling on the reverse channel, and in the future add other features as they occur.

Your experience on this site will be improved by allowing cookies.